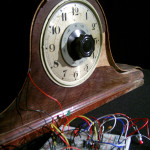 Since 2003, John Richards has been exploring the idea of ‚dirty electronics‘ through performance, writings and workshops. Dirty electronics refers to an approach in electronic music that is directly opposed to those found in mass produced digital culture and includes some of the following characteristics: designer trash, ugly, cheap, heavy, hand-made, designed to be handled or to come in contact with the body, ready-mades, hacked, bent, fedback and kitsch. Can the idea of ‚dirt‘ be seen as a critical ingredient in the process of creating electronic music?

John Richards‘ work explores performing with self-made instruments and the creation of interactive environments. He has worked with many leading improvisers and musicians in the field of live electronics, and is a founder member of electro-noise improvisers kREEPA, and the post-punk group Sand (Soul Jazz Records). Since 2005, he has directed the Dirty Electronics Ensemble, giving workshops and performances internationally that has included collaboration with Japanese noise artist Merzbow, Pauline Oliveros, Howard Skempton and Chris Carter from Throbbing Gristle. He performs regularly with Nic Bullen as Black Galaxy and kREEPA, as well as releasing solo material on Bullen’s label monium. In 2007, he released a piece on Gabriel Prokofiev’s nonclassical label for piano and electronics performed by GéNIA with re-mixes by Vex’d and Max De Wardener amongst others. Recent work includes collaboration with Tim Wright as sevenlegspider developing systems for live performance, installations, and music for Japanese choreographer Saburo Teshigawara.

He has written numerous articles on hybridity, post-digital theory and dirty electronics: DIY and bricolage approaches to working with sound. John Richards completed a doctorate in electroacoustic composition at the University of York in 2002, and he is currently part of the Music, Technology and Innovation Research Centre at De Montfort University, Leicester.