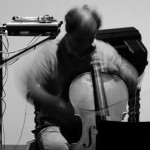 Giacinto Scelsi (1905-88), Italian composer of the same generation of Petrassi and Dallapiccola, was firstly influenced by Berg and Skrjabin. Since the Fifties and the Sixties Scelsi was been developing his own personal aesthetic, deeply involved with eastern philosophies, reaching a pure style in 1959 with the Four Pieces for Orchestra on a single note. His composing technique was based on improvisations on piano, later on electronic keyboards with probable multi-track elaborations. Then he let them write by musicians who collaborated with him: he didn’t consider himself a composer, but a messenger from an outer dimension. He was very near to the work of Gruppo di Improvvisazione Nuova Consonanza in Rome. In the late Seventies Tristan Murail and the Itineraire Group showed interest in the de-compositional characters of his music and in the qualities of research in spectral and micro-morphological aspects of the sound, practiced by Scelsi a few years before La MonteYoung and Riley.
Scelsi’s string writing is highly experimental for the use of copper mutes, detuning of the strings, natural reverberations, timbre modulations, microtonal beats, and for the tablature-like scores. The analysis of his String Quartets and the execution and discussion of some movements of his Cello Trilogy The Three Ages of Man, will show the particular timbre, acoustical and extra-European elements that identify Scelsi as a central figure in the actual musical reflection and production.

Nicola Baroni collaborated as a cellist to the Book and CD „Giacinto Scelsi-Viaggio al centro del Suono“ by Nicola Cisternino and Pierre Albert Castanet.
Nicola Baroni obtained conservatory diplomas in Cello Performance and in Electronic Music, as well as a degree in Musical Aesthetics at the University of Bologna. He participated in post-graduate courses in cello and chamber music with Franco Rossi, Alain Meunier, Anner Bijlsma, Siegfried Palm. He teaches Cello at the „Monteverdi“ Conservatory in Bolzano, in addition to Improvisation Techniques in the departments of New Technologies and Didactics. His performance and research activities in 20th Century repertoire have involved the following contemporary music ensembles: Octandre, Icarus, Siddharta, Musica Attuale, Musica/Realtà, Interensemble, Antisonic-Elektronika, FontanaMix. His interest in historical performance practice has led him to specialize in baroque cello as well, and to edit late 17th century music for Ut Orpheus Editions; he is now involved in electro-acoustic music, combined audio-visual techniques, and live electronics performance with „Laptop Electric Cello“. His discography contains music by Monteverdi, Torelli, Liszt, Malipiero, Villa Lobos, Scelsi, Gentilucci. He recently edited for the label „Bottega Discantica“ the CD Violoncello Italiano-XXI Secolo. For many years he has been active in the concert scene playing contemporary, romantic, and baroque repertoire, mainly in Italian theatres and in national and international festivals; he has also played in the United States, South America, and Japan.