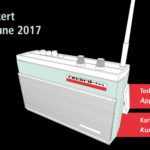 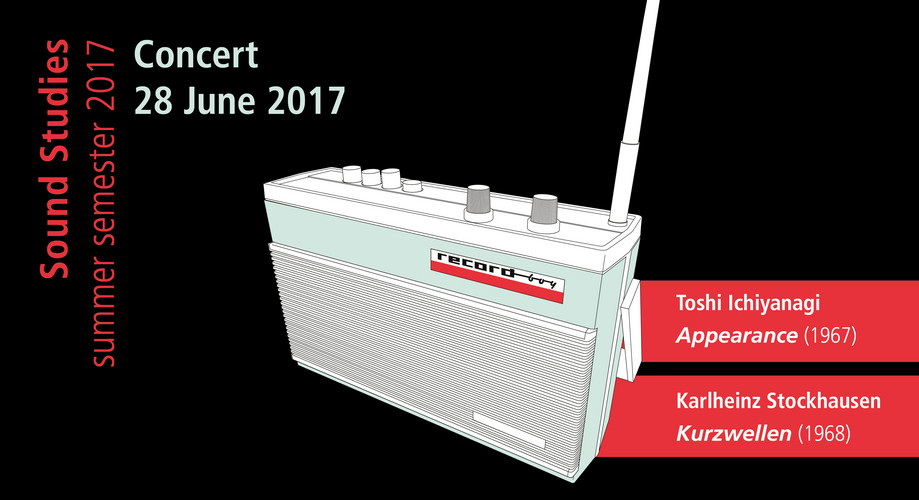 Our Summer Semester 2017 concert features a group of Sound Studies students performing a reinterpretation of „Kurzwellen“, a Stockhausen’s composition (1968) based on the peculiar sound characteristics of short-wave radios and „Appearance“ by Toshi Ichiyanagi (1967).

Entrance is free
This concert is made possible with the friendly support of the Jazz Institute Berlin, UdK.

A  group of students of the MA Sound Studies perform a reinterpretation of  ‚Kurzwellen‘, Stockhausen’s composition dated 1968 and based on the peculiar sound characteristics of short-wave radios.Four musicians, each equipped with an instrument and a specifically designed short-wave simulator, engage in an intricate collective performance, imitating and transforming each others output in a process of improvised musical metamorphosis. At the same time a fifth performer takes care of the filtering and positioning of the sounds over 8 speakers, circularly disposed in the room.The improvisational character of the piece generates every time a new outcome, following the composers notation yet ultimately raising from the connections between the members of the ensemble.

The Japanese composer Toshi Ichiyanagi played an important role in the New York avant-garde scene in the late 50s. He was connected to John Cage and considered as a „mentor“ to the Fluxus movement. His piece „Appearance“ (1967) is a composition for instruments, oscillators and ring modulators. It is representative for Ichiyanagis idea of „live-electronic-music“ and based on an interactional structure for the players without leaving aside the factor of unpredictability. Since hearing is preferred to expressing by Ichiyanagi, improvisation has to be started with careful hearing of the space. Some freedom has been taken regarding the instrumentation. One of the major differences with the historical versions is that the ring modulators are emulated in a digital way thanks to a max-patch. Also, one of the versions will be played with a saxophone and a Shrutibox.

The piece will be performed twice, by two different groups with a slightly different instrumentation.