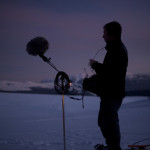 He was born in New York and has studied at Harvard, the University of Cambridge, the University of California Berkeley, and IRCAM in Paris where his teachers included Mario Davidovsky, Julian Anderson, Edmund Campion, and Philippe Leroux. In 2008 he participated in the European Course for Music Composition and Technologies in Berlin including seminars by Martin Supper, Wolfgang Heiniger, Kirsten Reese, and Folkmar Hein.
From 2009-2011 he was Mellon Postdoctoral Fellow in Music at Columbia University and he is currently Research Fellow at the University of Huddersfield. Upcoming projects include a Giga-Herz Prize from ZKM to produce a new work for piano, percussion, and electronics at the SWR Experimentalstudio in Freiburg, and a Franz Liszt Prize for a sound installation in Weimar in celebration of John Cage’s hundredth birthday.